Well, I will label tonight's run a "recovery run". I was hoping for something better. I knew I needed a 2 hour run to kick off my weekend, having done a little bit of speed work yesterday, or speed work as far as I am concerned. So I decided to do my usual Friday loop with an extra loop up the quarry trail added on.

My legs felt like they were filled with sand and water on every climb, but I ran up most of the quarry hill. Reaching the top, I decided that I would be marching the rest of the hills. Even with that, had to stop for 2 min. on the climb up South Fortuna Stairs to pop a gel. Felt better after that and made it up to the top. Felt like I was dragging a grand piano the whole time, but ended up doing the 2 hours and did the Fortuna Loop in 1:31 while I was shooting for 1:30. Its only about 12 min. more than my best time, so while not great, it wasn't bad either. I don't know the mileage, probably around 8 with about 1700 feet of gain.

But, what was fun was running down North Fortuna. I decided to practice my footwork and power down this rocky technical trail. As I ran towards the intersection with the perimeter trail by SR 52 I was watching my feet and literally almost ran face first into a mule deer doe who was minding her own business. For almost getting run over, she sure seemed calm, neatly taking one leap over a bush, on which she promptly started to graze.

As I left her after watching for a minute, I almost tripped over a very healthy looking coyote maybe 200 yards down the trail. I didn't see any of his buddies, but coyotes don't hunt deer, so I don't think there was any association. I think it was goofy luck, but he sure was pretty. They can get pretty mangy out there. And it was only the 3rd or 4th deer I had seen out there, so that was cool. And seeing the wildlife seemed to put a spring in my step on what was otherwise a bit of sweaty drudgery. 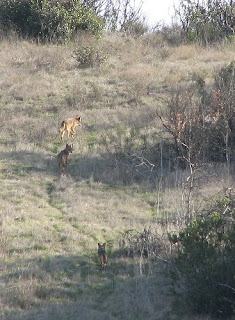 As I'm writing this, I'm thinking about Scotty out there killing it in Colorado. He seems to be well in front of the cutoffs, so that's looking good. GO SCOTTY GO! I put in for it this year, but didn't get it (for the first time in race history, no one got in from the waitlist). Maybe next year. And I'll get the scoop from Scotty. Anyways, I'll be hitting refresh several times through the night . . .
Posted by BJ Haeck at 10:36 PM