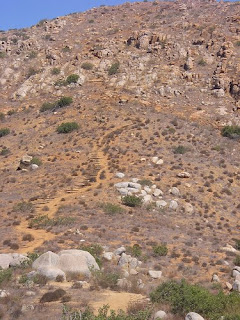 This is supposed to be a step back weekend, but having signed up for a 100 miler this week, it is hard to hold back. I'll try to take it easier this weekend, but I wanted to do my usual Friday afternoon run with a twist. As opposed to doing just one lap, I wanted to do the dreaded steps up to South Fortuna summit twice (see picture to the left). With the race coming up being 4 loops, I think I need to do a lot of loops around courses to get used to running the same terrain again and again. In that spirit, I ran my loop, cut down into Suycott Wash, then went back up S. Fortuna.

From the best I can figure, I did about 12 miles with 2,500 feet in 2.5 hours for 12.5 min miles. Had 3 gels during the run and drank 40 oz. of lukewarm water. I was tired at the end, but not dead by any long shot. This is in line with where I want to be right now. The loops at GTR 100 are 25 miles with 5,000 feet of climbing, so I did roughly half of one of those loops on pace for a 5 hour loop, although there obviously would be much slowing. Still, climbed well, used my sirius portable which worked remarkably well, and then finished with some music. All in all a good run. Tomorrow will do something more mellow theoretically and then a 3 hour non-hilly run on Sunday before I start stepping it up again on Monday.
On the NBA front, the only news is that Hedo Turkgo-glue is signing with the Raptors for "personal reasons" because he and his wife like the city better. I get that, but he's not going to have a lot to work with up there. He's a third bannana kind of guy, sort of a Lamar Odom-esque personality who needs someone to play off. Not sure if he can step up as a second guy and how well he'll play off of Bosh. Apparently they are paying him all the cap space they are getting from not resigning Marion, Delfino, and Parker. Lets see if he can keep his Magic karma going. I think he will regret not signing with Portland or the Magic in the long run professionally, but its cool that he likes where he is going to be.

Oh, and did a little decorating tonight. Can you say Fathead?
Posted by BJ Haeck at 10:04 PM