A whole 3 days without posts? What in the world am I doing? Monday was a day off. However, since I am going to Michigan a week from Friday and will do little if any running that weekend, I have a lot of training to pack in between now and then. So, I'm not expecting to take day off until that Saturday to make up for the 2 day enforced break.

On Tuesday I hit the trails around Crystal Cove State Park after my deposition didn't go. The area is a neat area of 5 or 6 intersecting parks, making it very easy to piece together a long trail run with lots of up and down. The hills are steep and hot, making it good training grounds with the reward of killer ocean views from the top and a run to the ocean if you want to do it. However, as I was to find out, they have some draconian rules of which I was not aware. 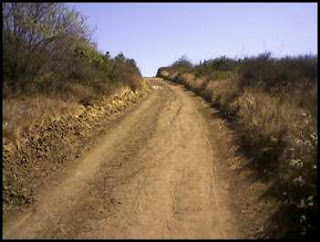 From where I started, the initial run to the top is fairly steep and steady, but manageable. There are a few hard pitches, but none too bad. I felt I had the strength to run the whole section, but tried to make myself walk some so I was training myself to walk fast. One of my surprises at North Face was that when I did walk the uphills, people were flying past me while usually I can walk right past people. That told me I need to practice that more, so I am.

At the top there were a number of options, so I ran about a mile or so down a number of the choices. As I made my way towards the far end of the park, I ran into another runner. As we chatted, he seemed surprised to hear I had come from Laguna Highway. "You know," he said, "that they close those lots at 4 PM. You must have come a long way to run to that entrance." Oops. I didn't.

Looking at my watch, it was a little after 4. I turned around and ripped as hard as I could for the parking lots. Luckily it was all flat or downhill on the way back. I made it about 4:25 or so, just as I was getting written a ticket. Fortunately, the guy was super cool and let me move my car. I found some street parking down the road, hopped a barbed wire fence, and headed back out. 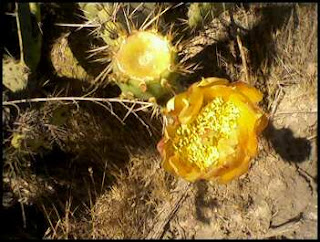 Unfortunately, however, I had been counting on running to a water fountain at the end of the highest trail in the park, so I had no water bottle and was now going on an hour and a half without water. I decided to just run as much as I could to get a workout in. It was hard to get back into a groove, but I was able to get another hour in, including some steep climbs, so though it wasn't ideal, it wasn't too bad. The views were great, the cactus and thistle were blooming, and I was REALLY thirsty at the end. All in all, about 2:45 of hilly running, with 1:45 of real quality stuff including my pell mell downhill to catch up.

Last night I had to work late and had some stuff to do so I didn't get the kind of run I would like. I just went in the canyon and took Gator with me, which is always a plus. We did about an hour and half, but Gator's paws were still sore from Saturday's adventure, and I wasn't that into it. The plus was it was a night run on the trails with the light, which is one of my favorites. If I have any advantage, and I'm not sure that I do, its that I tend to run well at night. While most are looking forward to dawn, I can't wait for the sun to go down! All in all, a relatively flat hour and a half, but ran pretty well with a little bit of speed and felt I had plenty left at the end.

I'm afraid tonight will be the same, although I'm going to try to make it to Mission Trails. We'll see. This weekend I'm planning on a double ascent of Cuyamaca Peak which is simlar to Fred's Mountain in that it gains about 1800 feet over 3 miles. It will be tough and hot. Then Sunday, I'll probably head up San Jacinto via Marion Mtn. Both of these are tough runs and will give me time at elevation. San Jacinto, as I will write about, is ridiculous. A chance for me to work on my uphill hiking prowess as there will be very little running . . .
Posted by BJ Haeck at 7:23 AM