On Tuesday, I climbed Monserate. For all of its beautiful Italian name, I would venture to say that it is easily the most grinding mountain that I train on. Located about 20 yards from the freeway, its an old hardscrabble eroded trail that climbs 1200 feet in 1.9 miles. It is surrounded by avocado farms, and the whole way up, I have to crank up my radio up to 11 to drown out the trucks on the freeway. When you get to the top, I'd like to say that the whole horizon opens up, with stunning views from Palomar to the ocean available. Instead, essentially you look down into some guy's pool. I've never even seen a hot chick sunbathing next to it. Even Jerry Schad has nothing nice to say about this trail.
Having said all that, I love to train on it. It is hardass. There's no flowers, no wildlife, no distractions. Just hot climbing. Bring it.
Did an up and back during the middle of the day on the way back from a meeting, which is always nice to break it up. Did the climb in 32 minutes which is a good sign. Was going to do a double, but duty called at work, so had to hustle back after just one trip. Made up for it by doing a good hour with Gator in the AM at a decent tempo, then 2:15 in the western fortuna hills including the Fortuna double north and south, shepardson canyon, and a bushwack to the top of Portabello hill. The highlight may have been finding a small horned lizard, my second in a week. These little guys are hard to find, so that was a good spot. Still no good pics however.
Run tonight felt pretty good. It was much cooler for some reason (only low 70's), so my frozen water didn't melt, leaving me pretty thirsty. My latest trick before runs has been nibbling on pretzels to up my salt intake to avoid cramps. So far, so good. I've felt a little full, but no cramps at all, so I'm going to stick with it for now. I'll leave the chia seeds for Scotty. 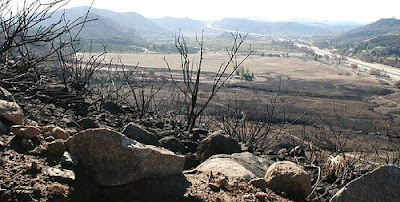 A lovely view from about 1/4 up Monserate. This was taken in 2006 just after everything burned, making it even more lovely than it is now . . . 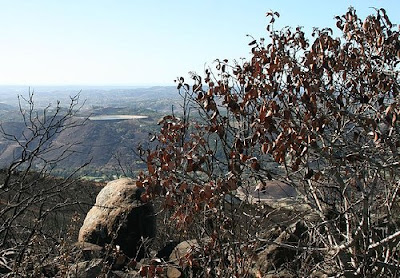 The beautiful commanding view of the water tank from the top of Monserate.