Man, its been a while. Sorry about that for the 3 or 4 people that actually stop by and spend some time reading this. So it started with my attempt at a double on Thursday. I wanted to do 2 laps of the Mission Gorge course in 4 hours, which I knew would mean 18.6 miles with about 3400 feet of climbing, right on par with the first 2/3 of a loop of the hundred. The run went pretty well, but real life intruded and I had to abort the second loop after making it up to the saddle, but I did the first loop in 1:50 and was on the exact same pace on loop 2. I had to leave off the loop from the saddle through the third climb and South Fortuna, but was able to do the rest and felt strong. Here are some pics looking down the saddle and back up the saddle. They don't call this the wall for nothing! And the footing is extra treacherous with loose DG all the way down so it is more like skiing than running. This was demonstrated all too clearly, but we'll talk about that towards the end of this entry. 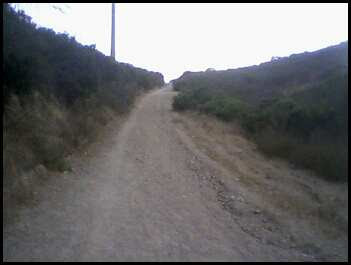 Looking up the saddle. 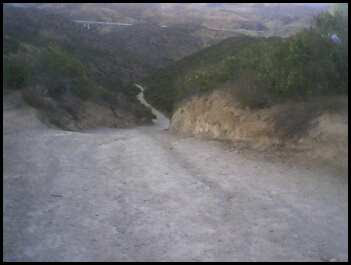 Looking down the saddle. Not a fun run down, as you will read . . .

After that was an easy run to end my training week on that Friday morning just to stretch the legs. Then it was a long trip to Chicago. The drive from Chicago to Holland, Michigan was super boring and full of construction. It was a shrine to orange barrels, although the way back, where you could see all the rusty buildings, power lines, and burned out housing projects was probably worse. Anyways, took Saturday off and Sunday was an easy run with my brother and brother in law up Mount Pisgah, which is a sand dune you used to be able to run up, but now have to take stairs. Lame. Anyways, its about 160 foot climb in a quarter mile up some steps, so it was a good workout with some really fun sandy rolling trails through the woods afterwards. 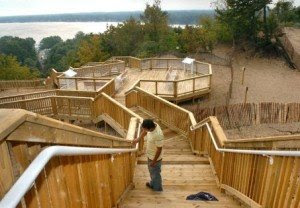 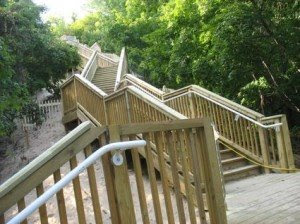 Monday was 1:45 in the canyon with speedwork. Felt good to stretch my legs.

Today was an adventure. I was going to do 2 laps, but was thwarted again. Was a little slow on my first lap, but doing OK when I was coming down off South Fortuna. Suddenly, I saw a red and white helicopter circling North Fortuna which then came straight for me. He looked at me, then flew back towards North Fortuna. Then I started down from the saddle. I was about halfway down when a woman came running up towards me. "Are you the medic?" she asked. "My brother is unconscious and covered in blood." I said I wasn't, but sprinted for the top of the saddle to signal the helicopter. Reaching the saddle, I was able to get the helicopter's attention, and they lowered a guy via a cable. We then made our way to the fallen mountain biker who had gone over his handlebars when he wiped out on the loose DG I had been talking about earlier. We all pitched in to help to get him secured. They then hoisted him out, and I helped bring the bike back to the parking lot, but my 2 lap run was shot again. Hmmm. I'm hoping the karma will help me more than the extra lap would have. The guy looks like he's going to be OK, with just a minor concussion and a lot of road rash. Yikes! 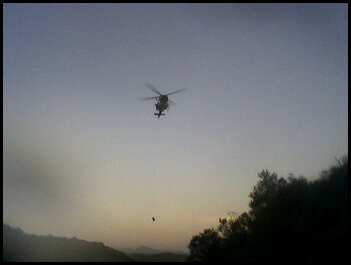 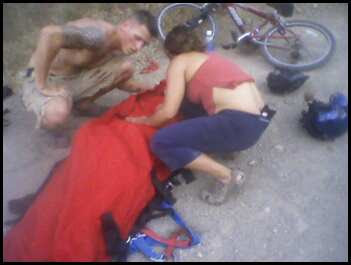 His sister and friend helping to get him secured. 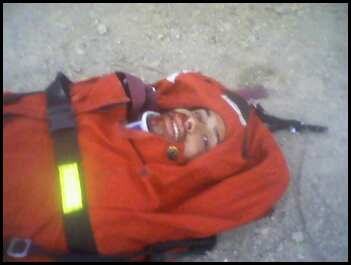 The guy was messed up with the biggest fat lip I've ever seen and lots of nasty road rash, but still managed to try to smile for his picture. Tough hombre. Nicely done. 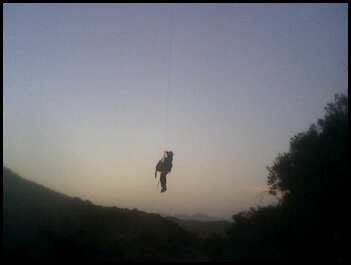 Hauling him up to the helicopter . . . 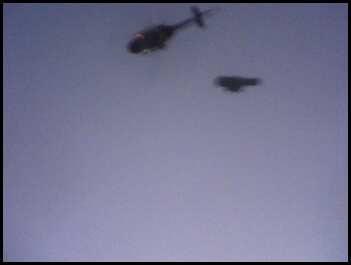 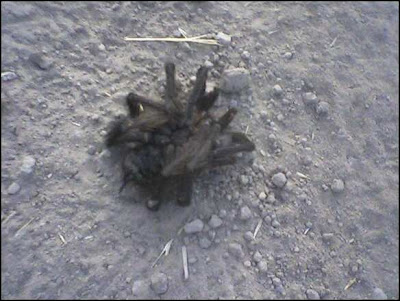 Tarantula!!
Comic-con week. We'll see what goes down running wise. I'll be getting my geek on all week.
Posted by BJ Haeck at 9:57 PM