Finally, two laps! As a reminder, each lap was about 1600 feet of climbing and 9.3 miles. My goal was to do the first lap in 2 hours and to do the second lap in enough time to equal 25 miles in 6 hours. My general plan is to do the first Teton lap in 6 hours, and try to get 8 hours in each subsequent lap. That would be 30 hours, which I think is not going to happen. I think I'll be a little over 8 hours at least, but if I can get the first lap in 6 hours, that means that I have to run about 20 minute miles to put me in at 31 hours. That would be pretty sweet and certainly plausible.

Anyways, to meet that pace, 25 miles in 6 hours, I needed to be able to do the first lap in about 2 hours and the second lap by 4:25 (figuring that I will need to do about 14 minute pace). It was a bit cooler than it has been (only 83 at the start) so that helped. I made it to the saddle in 35 minutes, which was about what I had planned. The climb up Fortuna was a grind, but on the way down I saw a San Diego Horned Lizard, which are relatively hard to see. They are getting rarer because their food source, which are native California ants, is disappearing due to competition from invading Argentine Ants. San Diego Horned Lizards won't eat them for some reason. Just fussy I guess. According to the web site where I found this picture, the poor guy pictured below had a honey do list. 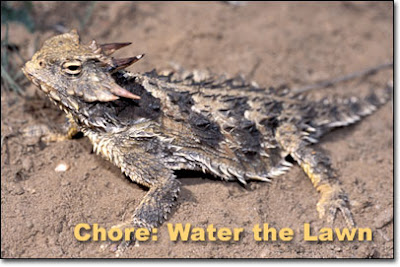 The trip down from the saddle went well, and I was back at the truck at 1:55. I took 5 minutes to reload my water and gu's and grab my flashlight. Heading out again, my legs felt all right, and I was on top of the saddle again in the same time it took me to get there on the first lap. Unfortunately, it started to go a little south from there. I really started feeling tired on my next trip up Fortuna, and had to break out the flashlight.
The technical trail at night started to slow me down at night. It was difficult to pick out a good line as there was not a lot of depth perception. As I got to the saddle, there was a group of people coming up in the pitch dark with glow bracelets around their heads and wrists and no lights. I don't know who had the idea to have a rave on top of Fortuna, but I can think of better places.

Don't know what kind of sound system they could carry up there . . .

Footing down the saddle was difficult, like skiing in the dark with a penlight, but made it down and stumbled through the tech trail, making it to the road, where I almost got hit by a bat. The run ended with the coyotes calling on Kway Paay. Total time: 4:15, 10 minutes ahead of schedule. Had it not been nightime technical trail, I think I could have shaved another 5 to 10 minutes off of that, so the run was a success.
By the end of the first lap, I was soaking wet. I think I sweat more than anyone I've ever met. So I was changing in the dark parking lot at 9:30 PM when a couple of guys pulled up in a jeep and got more of a full moon than they were expecting. Oops.
Probably no run today to give me some time to recover. I will try to grab a short one in the AM, but want to rest for a 3 lap effort on Sunday . . .
Posted by BJ Haeck at 11:11 PM