So the week proceeds apace. After taking Monday off, I had the chance to scoot up to San Jacinto on Tuesday. My thought was I could do the first two miles of the trail, which match almost exactly two of the climbs from Jemez. Well, joke was on me. I expected some snow. But after about 1/2 hour, this was what I got . . . 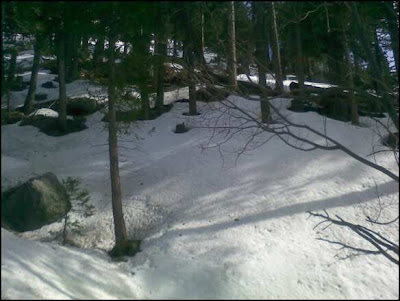 Very pretty, but not super conducive to doing hill repeats. I struggled through the snow in my trailrunners and shorts for a while, but really, it just was a pretty hike in terms of training value, which isn't the worst thing in the world . . .

On the way home, this was the view: 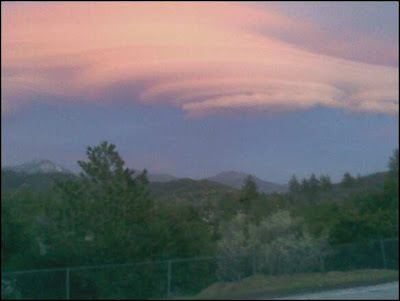 These are lenticular clouds. Straight from Wikipedia, the Reader's Digest of the internet:

Where stable moist air flows over a mountain or a range of mountains, a series of large-scale standing waves may form on the downwind side. If the temperature at the crest of the wave drops to the dew point, moisture in the air may condense to form lenticular clouds. As the moist air moves back down into the trough of the wave, the cloud may evaporate back into vapor. Under certain conditions, long strings of lenticular clouds can form near the crest of each successive wave, creating a formation known as a 'wave cloud'. The wave systems cause large vertical air movements and so enough water vapor may condense to produce precipitation.

So there you have it. Anyways, I think they are very interesting, and you don't see them all that often, particularly in dry Southern California. I didn't see any UFO's. Bummer.

Wednesday was a run through the canyon with Gator in the morning. It was raining lightly, so the tall flowers and low grasses were all bent over with the weight of the light rain that had been falling. Gator and I went crashing through them, and they left wet petals and leaves all over us. By the time were were done, I was soaked, not from the rain, but from all the moisture on the vegetation. We both looked like something from Swamp Thing!

No big plans for the next couple of days. I'm in a minor taper. I'll go for a run tonight from softball and then in the morning with Gator as tomorrow night is beer fest at the Padres game! Saturday will be the long run and Sunday I will be trespassing along the Goat Canyon Trestle. Hopefully more pictures then . . .