Yesterday, I had a run that can only be described as delightful. I often take forgranted how beautiful San Diego can be and lament that I am not in the Northwest. However, days like yesterday serve as a good reminder.

After work, I went to Mission Trails about 6:15 or so. I wanted to be done running by 8, so instead of doing some hardass climbing, I decided to run Spring Creek Canyon. This is a canyon that runs north-south from Mission Trails, underneath SR 52, and then out onto what may or may not be the Miramar MCAS. I say this because it used to be off limits, but now there are signs which merely discourage use and the use of the area by dogs in particular. Where this nature preserve stops and MCAS starts is anybody's guess. There are a few signs around that warn of live ammo, but often I've seen them on the way back on an out and back with no sign on the way out, so I don't think even MCAS knows.
There is a great run which I've described earlier in which you can connect Spring Creek with Oak Creek Canyon to make a fun loop. That was my intent as I headed out. Once under SR 52, you can either veer to the right to stay on the main path, which involves a fairly easy creek crossing, or you can veer right up a small fire road for about 50 yards onto the single track. I love the single track because it is undulating and has a few small, steep climbs. Either way, the trails are fairly deserted except for the odd super mountain biker who LOVE these trails, so keep your eyes out and, in my opinion, yield the way because these guys need to keep their momentum up to take some of the steep climbs. As you go, there are several spur trails that you can take off to the left. All of these lead up to the series of fire roads that penetrate the hills between Oak and Spring canyons and all of which may or may not be base property. They have official looking gates.
Today, the weather was perfect, in the low 70's, and the sun was down so there was a cool breeze. The trail up the canyon is a slight uphill the whole way, so you always feel you are working harder than you should be, because the grade is not very perceptible, but you can sure feel it on the way back. It being late, I had the canyon to myself. There were bushes bursting with yellow flowers up the slopes of either side of the gentle hills framing the canyon, and every once and a while, there would be a bush with big pink flowers. After about 3 or 4 miles, you hit a "y" junction. The well traveled path for the Oak Creek loop goes to the left. However, there is a fainter trail that goes to the right that I had never taken. Intrigued, I took the fainter trail to the right side of the ridge. This was an excellent choice. The trail meandered through encroaching vegetation burdened with yellow and pink flowers. After about a quarter mile I came up short for a tarantula that was crossing my path. This was the first live one I have seen in San Diego since I first moved here in 2003, although I know that they are around and can be out in force. I took a picture and gave him a wide berth as I continued up the trail. Not 5 minutes later, I pulled up again as another hairy arachnid ambled across the trail. Nothing for two years, then two in 5 minutes! Neither seemed particularly perterbed by me, although in photographing one with my water bottle, he raised his front legs, presumably to threaten me and make himself look even bigger. 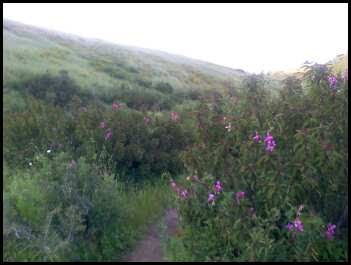 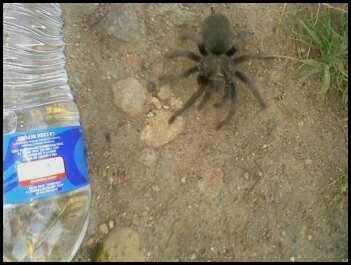 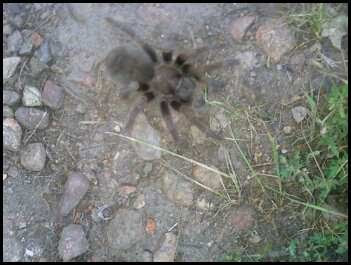 Tarantula 2! Both these guys were smaller than the ones I remember seeing in Tucson.

Leaving my hirsute friends behind, I headed up a beautiful switchback through knee high grasses and gained about 400 feet to the top of the hill. As I traversed around the hilltop, in front of me lay 3 quarters of a mile of gorgeous double track downhill. This was what trail running was all about. As I watched the sun set over the verdant hillocks separating spring canyon from oak canyon, I let my feet lead me through gentle undulations, rocky enough to keep my attention on the path snaking through the grass leading me back towards the canyon. After about 6 minutes of trail running heaven, I flew down the steep, loose, rocky last 200 yards back to the canyon floor and followed the wider main trail not towards Oak Creek, but back down Spring Creek Canyon and towards the car. I raced only against darkness as I put miles quickly behind me, taking advantage of the slight downhill camber of the trail. 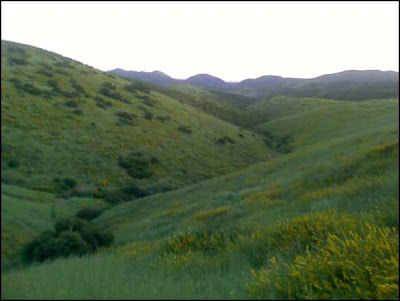 On the traverse. You can see Glorious Ridge (as I've dubbed it) runing from top right to left in the picture.

I made it back to the car just as dusk was reluctantly fading into night, the entire run taking about 1:40. However, I had very little climbing in the last two days that meant . . . Monserate! Followers of this blog (of which there are 0 as far as I can discern) know that this is one of my favorite climbs because of its sheer pointlessness. It is a 2 mile, 1200 foot rocky climb to nowhere located directly next to Interstate 15 in the hottest part of the county with a lot of burned out vegitation (although it is recovering from the fires finally) and no wildlife to speak of except for biting flies. However, its a convenient stop when returning from Riverside court to take a break and get some miles in, and it certainly makes you feel hard just being out on its slopes.
Today was a double ascent, a first for me. It took 28 minutes the first time up and 29 minutes the second. That is in line with my climbing from earlier this year, and also in line with my climbing times from Kway Paay (19 min to go 900 ft over 1.1 miles). I'm encouraged that my climbing is going well, if not spectacularly. What is most encouraging is that I can climb at the same rate for 2 climbs with only about 12 min. of active recovery. And less than 24 hours after a well paced 1:45 run the night before. I even had some wildlife as I spotted two striped racer snakes about 2 minutes apart darting off the path and into the bush. Its getting to be snake time of year. YES! (Oh, and another rattler on an hour hike Tuesday with Erica and Killer on the west side of Mission Trails). 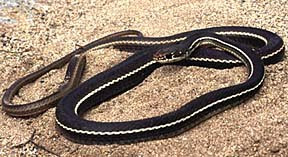 Stock footage of a striped racer.

My plan is to run tonight after softball and to take Killer since Gator is pretty tired from her earlier runs this week and has been feeling off. Killer has yet to do a run more than 45 min, and this is two hours of mixed trail and pavement with some busy roads and big hills. Its an experiment. We'll see . . .
Posted by BJ Haeck at 4:24 PM