Had nice runs Saturday and Sunday and calculated some of the mileage and elevation, although I'm not sure how accurate it is. Friday was 7 miles and about 1,000 feet of gain in an hour 15 on mostly fire roads with about 25 percent technical single track. Saturday was 10 miles or so in an hour 45 min with about 500 feet elevation gain. Its one of my favorite runs from my front door with about 10 percent on the road and the rest on single track, although its not particularly technical. Took Gator who was outstanding.

Haven't gotten a chance to check today's mileage. Was going to do the same loop I did last week, but had to make a pit stop at the beginning which took me off that route. So I ran Oak Creek Canyon all the way through the Marine Corps base, filming location for Top Gun, easily the most offensive movie of all time. It always gives me pleasure to pseudo-tresspass on their trails. (It is unclear from the signage where the park leaves off and the base begins.)

I then ran up over the fire roads and down into Spring Canyon which I ran back to the park. Ended with a climb up Kwaay Paay peak, which is about an 850 foot climb in 1.1 miles. There wasn't a ton of climbing on this run, with a gradual climb up to the fire roads, then this climb up Kwaay Paay. Took about 3 hours 45 min. Have no idea what the mileage was. It was in the mid-90's at the start and cooled to 78 by the end of the run at 7:15. Was very careful to take in a Roctane gel every 1/2 hour except for the last one. Also had a 100 calorie brownie pack to mix it up a little. Went through a 24 oz. Gatorade and 3 20 oz. waters and was still a little dehydrated by the end according to the pee test. 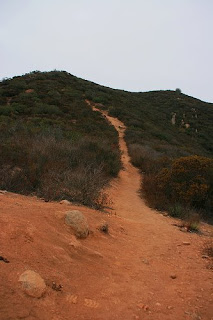 Generally satisfied with the weekend. Nothing outstanding, but was encouraged by today where the only large period of walking I did was on the Kwaay Paay climb and to get to the fire road. On the way up the canyon, I walked one minute out of every 10. On the way down the canyon, I didn't walk. I took one 5 minute break after 2.5 hours to simulate an aid station. Ran for the first 3 or 4 minutes up the Kwaay Paay peak and on the very few flats on the trail. Legs are very tired so feel like I gave it a very good effort, although know I have a lot of room for improvement. Run was on 100 percent single track, most of it pretty technical. Also walked for an hour and half at dog park in the morning, so I think all in all pretty good. Fuel for the run was a subway six inch ham sandwich half hour before heading out. Entertainment was sports radio and a 2-0 Padres win with Chad Gaudin pitching a one hitter in Texas. Hope everyone had a good weekend!
Posted by BJ Haeck at 10:06 PM