So, lots to catch up on. Training has been going as well as can be expected to this point. I used Christmas and New Years to really kick it off with a bang. The 23rd was 6 hours on Cowles Mountain doing repeats and a hike to the top of Cuyamaca with Erica, and the 24th was a fantastic soggy Christmas Eve AM run with the Desert Rats. It was 10 flat miles that I thought of skipping to enjoy the rain that was supposed to hit San Diego. Turns out it was all waiting for me out in the Cuyamacas. The run was 40 degrees, steady rain, and 40 mph winds. Awesome. Then a little jog on Christmas itself.

The weekend after featured the debut of my new Friday course. I added an additional climb of North Fortuna which added about a mile and 500 feet of climbing. My first rip through that course went 2 hours and 5 minutes. Saturday was more Cowles Mountain repeats, and Sunday was my last tailgate loop.

New Years was more of the same. The day after brought an Oriflamme climb. Here are some good fun pictures from the climb. 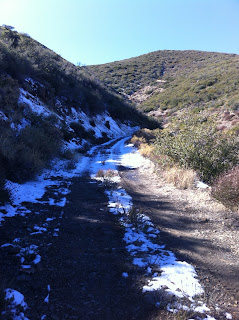 Lots of snow and ice towards the top of the climb. 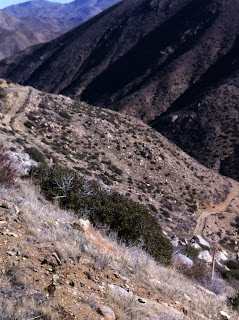 Some of the switchbacks going down (and then back up). The climb up is steep, then very steep for the first 3 miles, then levels off for a flat section for a half mile before the last 2 miles, which is up but bearable. 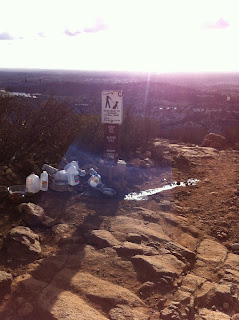 I'm not sure how this got mixed in, but this is all the dog water on top of Cowles Mountain. When I was on my Cowles Mountain training, there was a big sign that said "CAN YOU CARRY 8.5 LB. OF WATER TO THE TOP?" Yes, yes I could. It really made me want to lose 8.5 pounds before Hardrock. 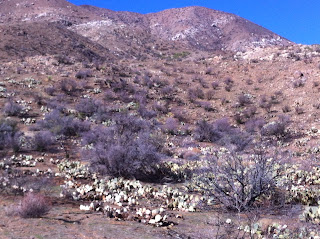 From the bottom of the climb, less than an hour after running through the snow and ice. I love San Diego County. Its nuts. 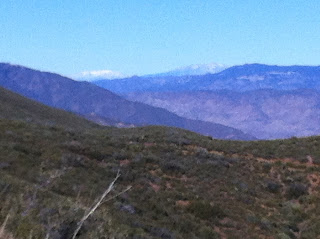 Fuzzy view from the top of the climb of San Gorgonio and San Jacinto. Hurry up and thaw! I need to get up at altitude! 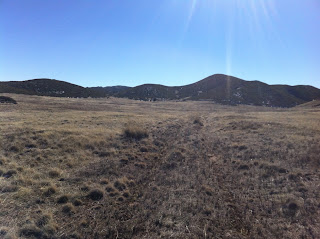 The meadow at the top of the climb. I always feel like Clint Eastwood should be trotting across the field on a pale horse . . . 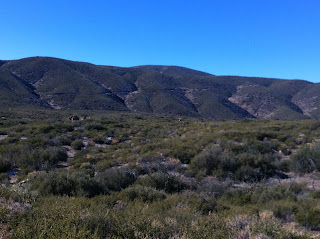 From the flat portion of the climb. You can see the trail cutting up along the face of the mountain in front for the last part of the climb. 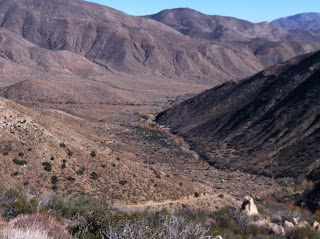 Sorry these are out of order. About 1/2 way down the last section of the Oriflamme climb. 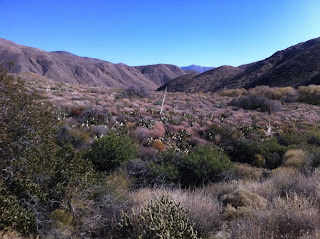 And another one from the bottom. Cacti abound. 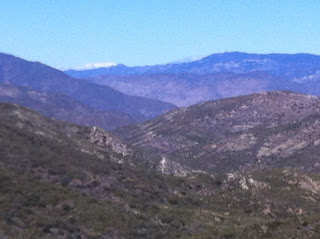 
It is about 2500 feet over 5 miles. with 2 sections separated by about a half mile plateau. When I started, it was 38 degrees with about a 40 mph wind, so I was bundled up tight. The run went well and got done in 2:45. Friday was the new course again, where I lowered my time by 5 minutes to 2 hours flat. Saturday was a double Oriflamme with Gonzo. It was 28 when we started, but clear and sunny, and it quickly warmed up. On the second lap, Gonzo lapped me going down, but I was able to stick the final climb and get a few minutes on the top, so we both cracked it. Good sign. Even better, I did the home course on Sunday in my normal time. My legs had passed sore straight to numb, so it was just a matter of sucking it up and getting it done. Finally today was 2 times up Kwaay Paay. So hitting all the major training points early, but still over 7 months away, so I need to make sure I'm not blowing my wad early. Pacing will be important. But so far, so good. I'll put up some more stats next time . . .