Well, it was an interesting weekend. The plan was to get in my usual Friday run, then 10 miles with Gonzo, then a long Sunday run, then 10 miles in the Cuyamacas. Well, Sunday didn't happen. I got to the trailhead from work, and realized I had forgotten my running shorts. My choices were to run in my work pants, run in my underwear, or go home. The first two promised chafing and threatened my running weekend, but I was mighty tempted. I had done the underwear thing before. There's even allegedly video of me running in the Cuyamacas in my Gator boxers and a long sleeve and a vest after I forgot shorts for a snow run. But I also remembered how cold it was and how I had chaffing issues for a bit after that, so I packed it in.

On Saturday AM, I met Gonzo at the Clairemont Mesa East trailhead at 7:30 AM. It was Gonzo's first run back after a little layoff and what I considered my kickoff run for Hardrock training. We did the Quarry loop, the Visitor Center Loop, South Fortuna, down the trail to Oak Canyon, then back up to the top of North Fortuna, then around to the rim trail and back to the car. Gonzo had one of those fancy wrist things, and it reported 11.5 miles or so and somewhere around 2:40. I don't know if it tracks elevation, but I would guess somewhere around 2800 feet or so. Not bad.

Erica wanted to go for a hike, so we ended up bringing Killer up to the top of Cuaymaca Peak. Its about 2.7 miles and something like 1700 feet gain to the top. The last third was essentially on and off snow and ice on the road, and Deeser took a good fall to the butt on a slick spot coming down. But she popped back up and finished strong. Fun afternoon and bonus climb!

For Sunday, it was repeats up Cowles Mountain. 6 of them, 3 up the front side, 3 up the backside. Could anyone get sick of this view? 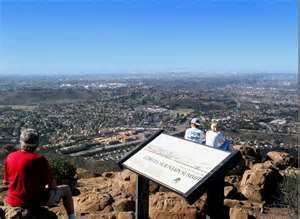 I was about to find out.

Leaving at 10 AM, I enjoyed listening to the Chargers whoop up on the Jets. That whole situation was hilarious. Any little mistake, and the Jets fans would boo at the top of their lungs. False start? BOOOOO! Bad fair catch signal? BOOOOO! Bad hair day by the quaterback? BOOOOOOOOO! Those were some angry fans. It would probably be just as bad at the Charger game next week at home, but the stadium will be half Raider fans, so no one will get organized enough to boo loudly. They will be too busy beating the snot out of each other.

Anyways, I did my 6 repeats. For each set of two, I would start on the big rock trail, go over Cowles then down the Golfcrest trail, then repeat. If you haven't been on the Golfcrest trail, it is packed. All the time. Running down is tough to dodge everyone in your way, especially as the trail is really rough. Its like running through a trail in the middle of UTC mall at Christmas time. But going up, you always have people to chase and catch. The Big Rock side is relatively quiet. Each round trip was about 7.5 miles and 2500 feet of climbing, so, if I did the 3 round trips I had planned (6 trips up Cowles, three from Big Rock and 3 from Golfcrest), it would be about 22.5 miles and 7500 feet of climbing. Doing the math, it comes out to 33,333 feet per 100 miles, or almost exactly Hardrock. So it was like doing a quarter of hard rock.

The goal was 6 hours. I did approximately 1:42 on the first round trip, 1:57 on the second round trip, and 2:11 on the last trip, adding up to roughly 5:50, or ten minutes under goal. Weather was almost perfect at 60 and mostly cloudy. One of the problems was food. I was starving by the last round trip, but I had only brought gels. I need to bring a little real food next time. After finishing, I pounded a foot long buffalo chicken Subway which really hit the spot.

No real interesting wildlife or anything like that. Just a grind past a lot of odd people. One time I'll take pictures so you can see what I share the trail with there. Lots of women made up to the nines on their morning stroll. And lots of dogs.

Overall a good weekend. My legs are pretty tired, and I have a ten mile run with the bad rats courtesy of Matt Davis tomorrow. He said easy on the invite, so I'm going to hold him to it. I've only ever seen Matt drink beer. Rumor has it, he actually ran once upon a time. I'll believe it when I see it.