Sorry I've been out of touch. A week and a half without a post. Naughty naughty. Well, this was the last week of training. A real push. Highlights of the week were a double ascent of Cowles Mountain at 34 minutes per ascent, a 3 hour loop in Mission Trails partially at night, and a couple of canyon runs, including one in which I would have finished under 1:20 but I slowed up to let Gator catch me as I was gapping her pretty bad. Poor girl is starting to show her age, and she was really straining to keep me in site, so I backed off the last 2 miles to let her come back to me. But I know I would have had the time, which is good to know.
The week culminated yesterday with a double ascent of Palomar up the Oak Grove trail. This is a 7 mile out and back on 2 miles of techinical single track followed by about 5 miles of fire road. From the start, there is maybe400 yards of downhill on the whole climb. Its about 3600 feet of climbing to a fire tower as I've written before. So the first ascent went very well. It was still cool with a breeze, so I could make some time. I was up and back down in about 3:05. Not bad, but not great. Still, I was very satisfied. After a brief break in the AC of the car and a snack, I hit the road again.
This second time up was very difficult. It had gotten to the mid 80's and I was feeling a ridiculous week of training in my legs. In the end, it was up and back in 3:40 the second time. Disappointing, but I was glad to knock it out. It took a lot out of me, and I was sore all day long and am still sore today.
Lots of great reptiles from this week. 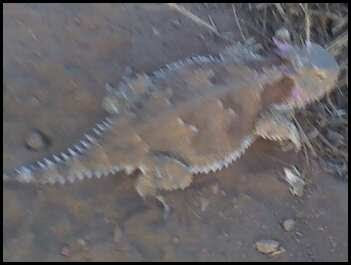 Too bad this guy was blurry. The biggest horned lizard I've ever seen, maybe the size of my palm. He was in mission trails, but I also saw another on Palomar. 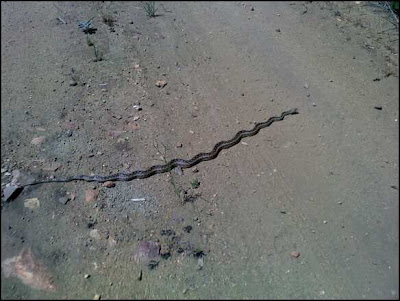 This was towards the top of Palomar. These gopher snakes can grow pretty large. This gives you a decent idea about his size. This is the entire roadbed of the fire road, so you can see he's pretty long. 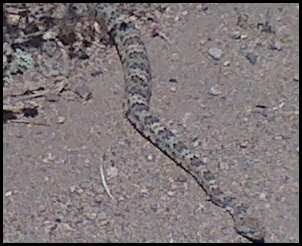 This is a specked rattlesnake. I've never seen one before. Absolutely beautiful. I also saw a red rattlesnake, which is fairly rare. In fact it was the second I've seen, and both were on the same trail on Palomar and about the same spot about 2 years apart, so maybe they are the same one. Palomar definitely has more rattlesnakes than anyother spot I've been. Sweet.