I have nature on me!

So it was an interesting set of runs this weekend. Friday was the usual course, and I was on record pace. I ran most of South Fortuna except the stairs, and I was on top of the last bump of North Fortuna in 49 minutes, but then I saw something fascinating. There is a species of wasp called a tarantula hawk. These wasps prey specifically on tarantulas and other big ground spiders. They sting them, effectively paralyzing them. Then they drag them into their burrow, lay their eggs, and the larvae eat them alive. Gruesome!!

So as I rounded a corner, I was distracted by a flash of orange, and sure enough, here was a tarantula hawk attacking a tarantula! So here's the philisophical dilemma: Do I stay and watch this unfold, something I've seen in nature films but never seen before in person? Or do I push on and keep my record pace? I was pretty torn, but ultimately decided to stay and watch. In the end, I run trails to have unique experiences, and while I would like to get faster, it was worth taking a break to watch, especially knowing that I had a great 50 minute workout.

So I watched the wasp sting the tarantula, then leap back and wait to watch its handiwork. The spider flipped onto its back and twitched for a minute or two. Then the wasp came on top of the spider to see if it was paralyzed. And it was. 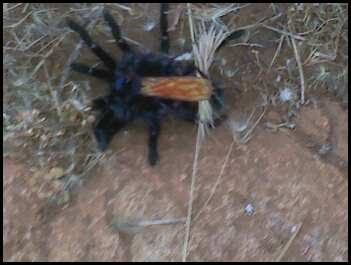 Sorry this is blurry. Its a blowup of a pic from my camera phone. You can see the wasp doing its business.
Afterwards, I watched it haul the poor spider into its burrow. The whole thing took about 10 minutes. 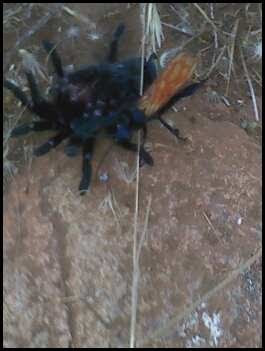 Here she's dragging away the spider for a nasty death.

After the break, it was hard to get the motivation going to push it again so I cruised to the finish. Saturday, I did two hours early in the canyon as I was headed to Palm Springs. Sunday, I took the tram up to Mountain Station on San Jacinto to run up to San Jacinto peak. Unfortunately, there was still too much snow, so there was no way to get up, at least running. I was able to do about 2 hours on lower trails and call it a day.

So today, I ran up at Crystal Cove. I did about 12 miles in 2.5 hours with about 2,000 feet or climbing. Not bad, not great. Didn't have tons of energy, but did all right. There was lots of snake sign - undulating marks in the loose dust on top of the trail. Finally found a sucker in the back part of the park. He was the longest gopher snake I've ever seen, like 4 feet. Got a quick pic of him as he headed into the brush.

This weekend will be volunteer work for the SD 100. Trailmarking all day on Thursday, then sweeping and other similar stuff on Saturday. I'm guessing I'll do about 20 miles on Thursday and another 30 on Saturday. I might help on Sunday too if they need it. Always good to give a little back . . . 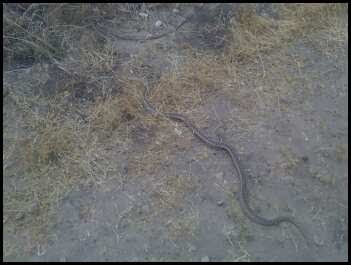