Had a good run today. Did my new modified loop, with 4 climbs, grasslands, telephone pole, north fortuna, and south fortuna. If I had time, I would have thrown a Kway Paay at the end as well. Its about 2200 feet of climbing, and it went pretty well. At the beginning, I saw my first rattlesnake of the season, as you can see below. He was a baby sucker, about 8 inches. I got him off the trail so he could have a chance tonight, when its supposed to get cold and rainy. On a lark, I ran the first 2 climbs entirely and about a quarter of the way up North Fortuna. Interestingly, it only cut a minute or so off my total North Fortuna climb (about 22 min). So not sure of the benefit of running unless you are really trucking it. Anyways, came down from North Fortuna and worked my way into the wash where I ran into Erica and Killer. coming out of there, ran into another ultra guy, Don, who was on a recovery run from a 50k about 1.5 weeks ago. He was pretty strong, and it was work keeping up with him on the way to the top of the South Fortuna stairs. He dropped me on the little rollers up to the peak, but I was able to catch up on the descent. He seemed like a careful descender who still had some lactic acid saved in his quads from his last ultra. I had no such handicap, and I had a nice descent back to Oak Creek Canyon.

Total time was about 2:20, which wasn't bad considering the walk in the wash and the snake pit stop. Listened to the Lakers get thrashed by the Hawks. They are clearly in a malaise and need the playoffs to start. They really miss Bynum's shot blocking inside. Hopefully the rain comes tomorrow . . . 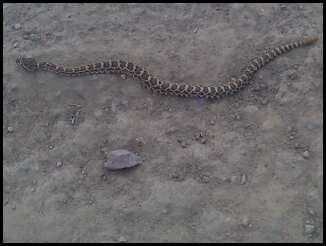 First rattler of the season! Still messing with my new phone and trying to figure it out. I hope to have some better pictures soon. 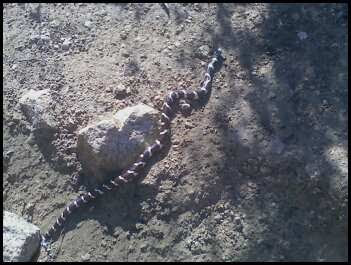 First snake of the season! This was from Sunday, I think, at the top of North Fortuna. A California King Snake. It was a great wildlife run as I also spotted a road runner and a the biggest horned toad I've ever seen, who was as wide as he was long. They are fairly rare in San Diego County, but I see them every once and a while in Mission Trails. I think they are doing OK there.